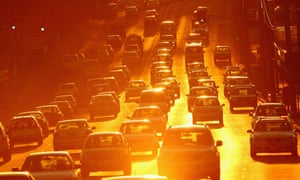 New report predicting nine major roadways will be gridlocked by 2031 says key is public transport infrastructure, and getting people out of cars and onto bikes.

There is no way for Victoria to “build its way out” of congestion, the chief executive of VicRoads, John Merritt, has said, with a new report predicting nine major roadways will be gridlocked by 2031.

The data, released by VicRoads on Monday, shows the Monash, West Gate and Eastern freeways will be among the worst arterial roads affected by congestion within the next 11 years.

“With our freeways, whatever capacity we build tends to get taken up, our freeways run close to capacity pretty much all the time,” Merritt said.

“So the point we’re trying to make is, given that Melbourne is such a popular place and growing so strongly, you can’t fix it by building roads alone.”

The key to easing congestion would be the building of public transport infrastructure, as well as getting people out of their cars and onto their bikes, Merritt said.

“The research into both walking and cycling indicates a large number of people would do it more if it felt safer, particularly cycling,” he said. “If we can make the experience safer, though not a solution in itself, [that] is part of the solution.”

The public transport minister, Jacinta Allan, agreed with Merritt that the answer did not lie in road projects alone.

“We need a range of projects that boost capacity on our roads and our public transport system,” she said.

“That’s why we’re investing billions in building Melbourne Metro Rail, removing 50 of our most congested level crossings and delivering new trains and trams for Victoria.”

The premier, Daniel Andrews, scrapped the project, which the former Coalition government signed up to just weeks before the November election.

“When the head of the roads authority comes out and says ‘don’t drive and take the train,’ then by God we’ve got real problems,” Guy told radio 3AW.

“I think the East West Link is essential. You have to have a mix between road and rail. It’s not all or one. Sure the government is investing in some aspects of public transport, but it’s not enough. You have to also invest in roads, as you do rail.”

But Allan rejected that claim, saying; “The East West Link would have been a colossal waste of money that would not have solved congestion on our road network and would have sucked vital money away from other projects that will.”

Acting Greens leader Sam Hibbins said much of the congestion could be blamed on single-occupant car trips, which he said were “choking our roads”.

“Many people sitting in Hoddle street and on the Monash freeway are there because they can’t rely on our public transport system,” Hibbins said. “People love to ride their bike but are concerned for their safety. We need cultural change on cycling safety.”

The government’s Melbourne Metro railway project was too far off to be seen as a solution, Hibbins said.

Construction for the railway, which will see new underground stations built at locations including Swanston street in the CBD, was expected to begin in 2018 and be complete by 2026. The government has said it would allow 20,000 extra passengers during the morning and afternoon peaks.