In the News: Underground South Yarra station ruled out as too expensive, Victorian Government says 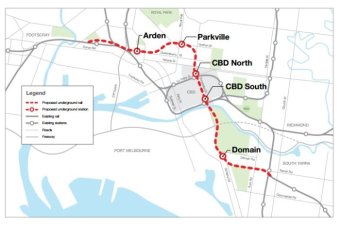 The Melbourne Metro Rail project will not include an underground station at South Yarra, because it is unnecessary and too expensive, the Victorian Government has said.

The Opposition and the Greens have been outspoken about the need for South Yarra, in the city's inner south-east, to be added to the list.

But Public Transport Minister Jacinta Allan said the benefits of a new station would be minimal, and it would cost up to $1 billion.

Ms Allan said passengers at South Yarra would see improvements in reliability and congestion with the removal of the Cranbourne-Pakenham line from the station.

"Removing those trains from running through South Yarra station, provides the space and capacity for more trains that are more frequent and more reliable," she said.

Currently the proposed loop has rail tunnel entrances at South Kensington and South Yarra, but no stations.

Ms Allan said the Melbourne Metro Rail Authority showed that the case for including a new station at South Yarra was "very poor", with a predicted return of 20-33 cents for every dollar invested.

"It would need to be constructed some distance away from the existing station, which would see a significant increase in the number of homes and businesses, including part of the Jam Factory, to be acquired," she said.

"As part of the Melbourne Metro Rail project we will be purchasing ... an additional 37 high-capacity trains. These are longer trains which will be running through the network, which is why longer platforms will be needed, and why just putting another station at South Yarra is just not a proposal that stacks up."

She said there were many engineering problems with building a station under the existing South Yarra station that made it unfeasible.

"There's options there where you could run a platform in under Osborne Street. It wouldn't require the acquisitions or the work that Daniel Andrews is claiming," he said.

"I think what she's done is basically cherry-picked the worst, most disruptive, way you could build that station," he said.

"In the original business case there were two options canvassed, one was a Jam Factory location, which was the more expensive option, and but another was a location at South Yarra station which would cost less."

"You just have to look at the fact that they're proposing to build a station under Flinders Street, under buildings such as St Pauls Cathedral, Young and Jacksons, and Flinders Street station, and they're not acquiring them," he said.

"Why can we do that in the city, yet to do the same in South Yarra, the Minister would have to come in with a wrecking ball and knock over and acquire properties to do so?"

Mr Hodgett said bypassing South Yarra with the planned project would cause problems in the future, when the population grows.

"My view would be to go back and look at the plans, rework it. You're going to need - at some stage - an interchange, if Melbourne Metro's built," he said.

The Greens would continue to argue for works at the station, Mr Hibbins said.

"I'll also be calling on them that if they're steadfast against building the interchange, to build the Melbourne Metro in the way that there's provision for a South Yarra station in the future and not build it in a way that can never be done."

It is an absolute privilege to serve as the member for Prahran, as our local member of Parliament. I love Prahran. It is a thriving, vibrant, diverse community, with Chapel Street as its social and economic heart. It has been my home for well over a decade, from when I...

Mr HIBBINS: My question is for the Minister for Housing. Minister, Azra has lived in South Yarra’s public housing towers for 17 years. In that time her home has never been upgraded. She is forced to stuff old newspapers to fill gaps in the windows to keep the cold out,...

My adjournment matter is for the Minister for Consumer Affairs, Gaming and Liquor Regulation, and the action I seek is for the minister to protect renters with controls on rents, improved standards and more secure leases. Around 60 per cent of people in Prahran are renters, and renters need a fair...